This month I met up with 2 retired colleagues for lunch, and it's always nice to catch up with them. They were such great colleagues when we worked together.
I also met up with two current colleagues for breakfast one Saturday, and with the lovely Grace, for lunch at Ikea.
A neighbour who I met through the Buy Nothing Group, invited me to her house to give her a quote to paint her dining room furniture. She wanted a green colour and I took her all the greens I had. She chose "Lichen", but sadly due to Covid, the Fusion Mineral paint stock in Australia is quite low and I don't have enough of the chosen colour to start the project.
They come from Canada, and I've just heard again from my supplier that instead of expecting them next week, they think it will be end of August!
The Buy Nothing neighbour gave me a Hall table/coat rack, and I've started prepping it to be painted hopefully this weekend. 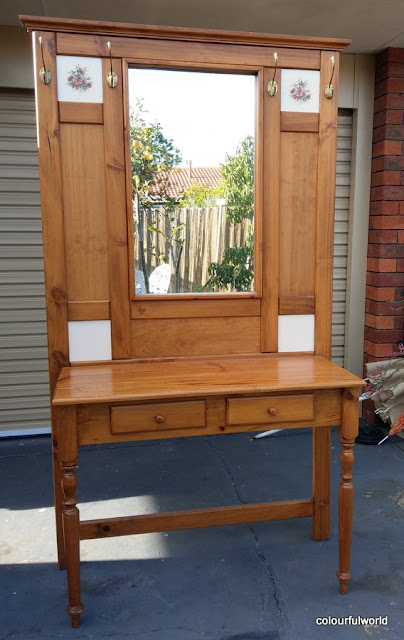 I had already started on this cupboard I've had in the garage for ages, and wanted to paint a few stripes on the doors, and leave the rest in the original wood, but I haven't been feeling the love for what I did and put it back in the garage until I get some inspiration. 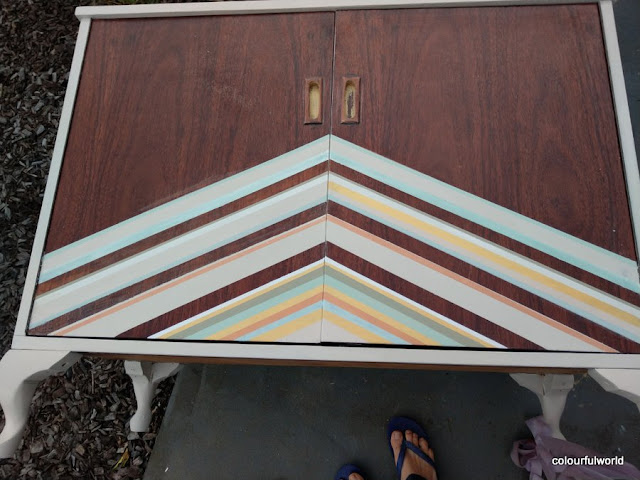 And I did a happy dance when I sold the chest of drawers Grace had given me a couple of months ago, so I could revamp and sell. 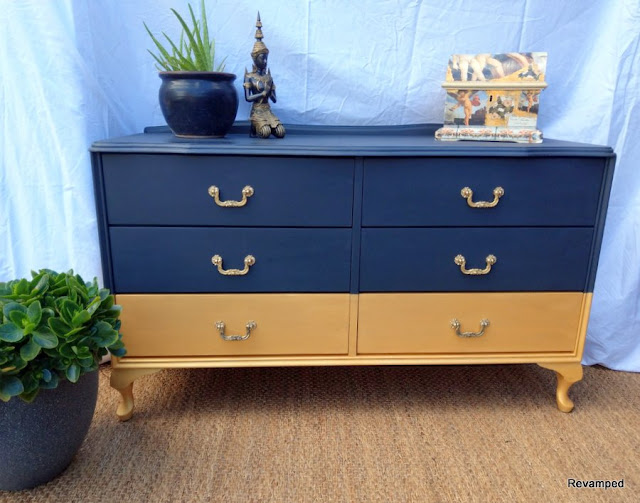 I went to the Optician because of a a cloudy sensation over my left eye. My myopia has improved, which surprised me. She put some drops in my eyes and a while later I went back in for further investigation, but she couldn't find any reason for the cloudy sensation.
A few days later, the sensation was still there, and I consulted one of our Doctors at the clinic to ask for his opinion. He thought I should see a proper Ophthalmologist and gave me a referral and I've booked an appointment for the 10th August. They seem to be quite busy as the one the Dr first recommended was only for the end of August.
The Portuguese Women's Association of Western Australia organized a Christmas in July event at the South Fremantle Football club on Sunday 26th of July.
The Committee ladies, of which I'm a part of, had to go to the hall on Saturday, to decorate it with Christmas things, set up a Christmas tree, decorate the tables, etc.
We also had to contribute Christmas dessert, and another lady and I had to make "rabanadas" (French toast), which is typically only made at Christmas time in Portugal.
I had already bought 5 French baguettes and cut them up into about 90 slices so they could harden.
When I returned from the Fremantle club on Saturday, I set about preparing the slices, by soaking them in milk that had been warmed up with sugar, lemon peel and cinnamon sticks.
The slices were then dunked into whisked eggs and fried a few at a time.
It was a very lengthy process, with a few changes in oil.  After sitting in absorbent paper for a few minutes they were then sprinkled with a mix of sugar and cinnamon.
They were so moist and delicious, but after frying 90 slices I don't want to fry anything else until Christmas time....the real one in December!

On Sunday the committee ladies had to be at the club 2 hours before the event to set up the various desserts on the cake stands. These stayed at the dessert table until after lunch when the waiters would put a stand on each table.
Guess what? When I saw the "rabanadas" I knew straight away those weren't mine, and sadly they were quite dry. Jose was major disappointed, even though he had eaten 5 or 6 of mine the night before.
Later when visiting friends at another table they told me how delicious the "rabanadas" were and I told them they most probably had eaten mine.
But apart from this, the food served by the team at Benny's Bar and Cafe was delicious, the musical entertainment by a few Portuguese singers was very good too.
The kids were delighted with face painting, and later in the day Father Christmas made an appearance to deliver a gift to each kid.
A representative of the Variety Organization came by to collect kids gifts that everyone who attended had been asked to contribute.
I have also started sewing the new cushions for my patio, but I've also ran out of fabric, as my local Spotlight only had 3 metres of the turquoise fabric. I visited the store again today, but they haven't yet received more, so it's all on standby. The cane chairs have all been oiled though, so just waiting on the new pillows.

And of course with the cold weather my cats can be found curled up sleeping most of the day, although the other day when I arrived home from work Twiggy was sitting behind the lounge blinds looking out to the street.

And Friday as I arrived at my French teacher's house I spotted this beautiful sunset. 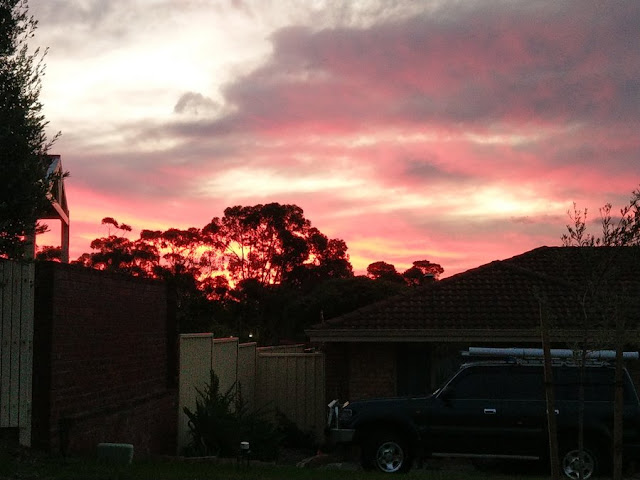 Hope you all have a wonderful weekend.
Posted by Sami at 00:12