On Tuesday 3rd April, we went to my sister's house to pick up my 2 year old great-nephew from San Francisco, so we could take him to the park.
My niece had to go to the hairdresser, my sister and my younger niece (the bride) had to pick up the wedding dress and do some other wedding related chores.
Little M grabs his little scooter every time anyone mentions going to the park, so we installed his car seat in our rental car, put his scooter in the boot and off we went to the park.  Just outside the centre of Cascais is Marechal Carmona Park , a great area with a lake, cafe, kid's playground, chickens, ducks and peacocks roaming around free.

We started on the swings, then the slides, but we had been at the park for probably 20 minutes when it started to drizzle.
The forecast had been for rain the whole day so we decided to return home to little M's great disappointment.


After a short rest at my parents house where they were staying, my younger sister and nephew (who had arrived from South Africa that morning), and my parents showed up so we could all have lunch together at middle sister's house. A noisy affair as usual with 10 people around the table exchanging their latest news.

After lunch a few of us got into two cars and went to Cascais Shopping for clothes shopping - my husband needed a suit as he's lost weight and didn't have anything suitable to wear for the wedding, and my nephew needed a jacket too. We ladies were there to give our opinion 😉

On our return to my sister's we helped her with dinner and soon enough my brother in law  arrived from work and joined the crowd for another noisy meal. The bridal couple joined us much later after we had finished dinner.

On Wednesday 4th April, my daughter Karina had to meet with someone in Lisbon, so my husband and I, Karina and my younger sister and nephew drove to Lisbon. While Karina attended to her business we walked to the nearby Basilica da Estrela (Estrela Basilica), a former Carmelite convent.
Built by order of Queen Mary I of Portugal, when she gave birth to her first son (Jose, Prince of Brazil), construction started in 1779 and was finished in 1790 two years after the death of the prince at the age of 27 with smallpox.

Located on a hill, the church has a giant dome and is visible from many parts of Lisbon. It is built in the baroque, neoclassical style with twin bell towers, lots of statues of saints on the facade and walls and floors covered in grey, pink and yellow marble in geometric patterns.

The tomb of Queen Mary I is on the right transept and behind it is a cork and terracotta nativity scene with more than 500 figurines. Unfortunately shortly after we arrived we were ushered to the back of the church as a church service was about to start, so we didn't get to see the nativity scene or the tomb.
Across the street the Jardim da Estrela (Estrela Gardens) is a lovely neighbourhood park with plenty of seats, greenery and mature trees, a pond with ducks, a wrought iron bandstand where music is played in Summer, statues and a nice cafe. Inaugurated in 1852, the park covers 4,6  hectares, and is opened from 7am to midnight every day of the week.
One end of the route of the famous yellow Tram nr. 28 that a lot of tourists ride goes past the Gardens and the Basilica.


After a stroll around the park that was full of grandparents with grandkids, we were feeling a bit cold so we went into the coffee shop for a warm drink while we awaited for my daughter to let us know when she was ready.

I've never visited it, but on the northern side of the park next to the English Church of St George is the English cemetery where British nationals have been buried for a couple of centuries. You can read the story here.

When my daughter was ready we joined her down the road and went for lunch at a nearby restaurant that catered for the workers of the area. Service by a grumpy overworked waiter was quick, food was average and cheap.

I'd heard of an artisanal factory - Fabrica do Pastel de Feijao (white bean tart Factory) - where award winning "bean tarts" were made, and because it's one of my favourite Portuguese pastries I convinced my husband to drive us there for dessert and coffee.

Situated near the National Pantheon,  we spent a lot of time driving around the area, getting lost in the narrow one way streets, until we eventually found parking and walked to this tiny bakery to savour a pastry.
At first when I saw the pastries I was disappointed, because those weren't the bean tarts I was expecting - the normal bean tarts at pastry shops are round, these were rectangular.

These handmade tarts were reinvented by a pastry chef, using similar ingredients - white beans, almonds and eggs (no flour) - the pastry was nice and crunchy, the filling moister than the original ones, although a bit too sweet for me, but overall they were beautifully crafted.
If you visit Lisbon you might want to give them a try - Fabrica do Pastel de Feijao, Rua dos Remédios 33 (in the Alfama area). 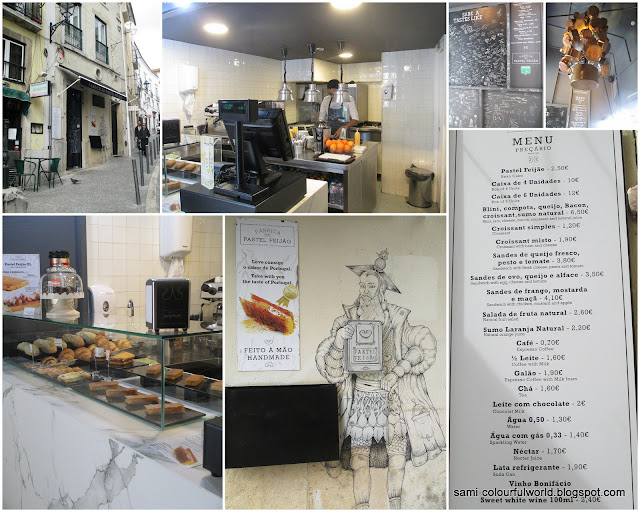 Pastry and coffee done and we went back to the car to our next destination - Museu Nacional dos Coches (The National Coach Museum) at Avenida da India, in the Belem district.
Situated in a new architect designed purpose built building since 2015, the Coach Museum is one of Lisbon's most visited museums housing one of the finest collections of historical carriages in the world.
Originally created in 1905 by the last Portuguese monarch - Queen Amelia of Orléans, to house an extensive and impressive collection of carriages that belonged to the Portuguese Royal family and nobility from the 16th to the 19th centuries. 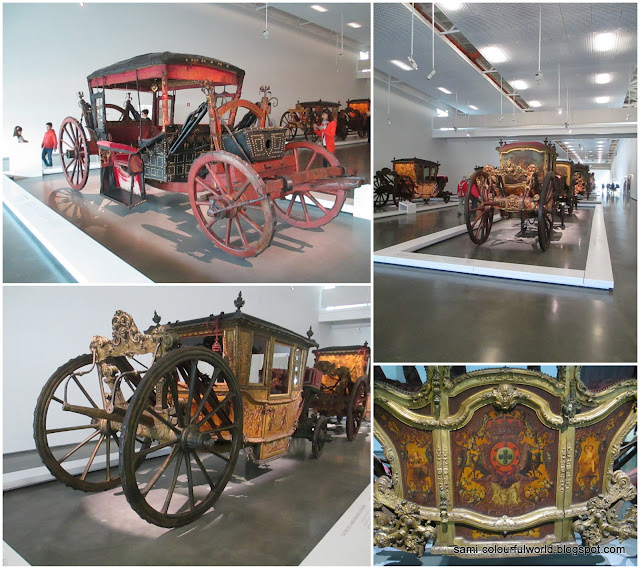 It took us about 2 hours to visit the Museum and then we got back in the car and drove to the other side of the busy road to the  Torre de Belem (Tower of Belem) and Padrao dos Descobrimentos (Discoveries Monument).

And on Monday I'll show you a fabulous mural I spotted while in the car on the way to Lisbon.
Have a wonderful weekend.