My August and September Wrap-Up

A bit behind on my August wrap up, but here it goes :)

AUGUST
We started the month of August by demolishing the shelves in our pantry, painting the small space and then buying narrow kitchen units from Ikea to gain more shelf space.
Two weeks later I met up with Grace at Ikea for a meal and an uplifting chat, and I took the opportunity to buy the drawer fronts for the drawers where I now keep the tins. The top drawer needs a larger front, so I'll have to return to Ikea some time. I've bought small handles, but these are still awaiting to be screwed in.
Everything has a place now and I now have a small counter separating the top and bottom shelving where I could keep big appliances so they don't clutter the kitchen bench. 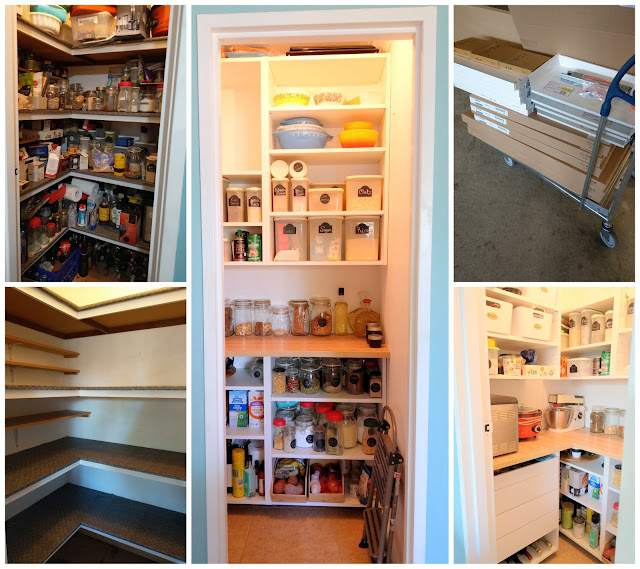 Next door to us, the small old house that was sold a couple of months ago was demolished, and the block was cleared. A short while later the cement foundation was laid and was left to dry for a week or so. 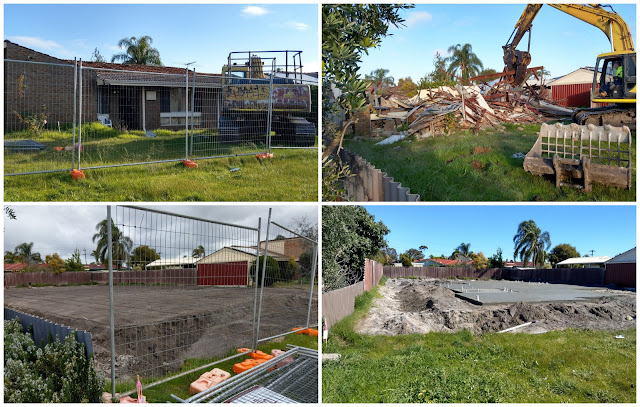 Jose started fixing up the walkway next to our driveway. The heavy cement pavers had been laid too far apart, were also on a slant and there were some weird pointy stones separating the driveway from the walkway.
We got some bricks similar to our driveway bricks from our suburb "Buy nothing group", the stones were removed, a lot of sand had to be removed, and the bricks and the cement pavers were laid level with the driveway. This back-breaking job took about 3 weeks, but the walkway is now ready and safe to use.
My job will now be to paint the cement pavers in dark grey. Jose's next job is to put new tiles on the small front porch, as the brown original tiles are slippery when wet.
(The photo on the left shows the big truck that brought the excavator that demolished the house next door). 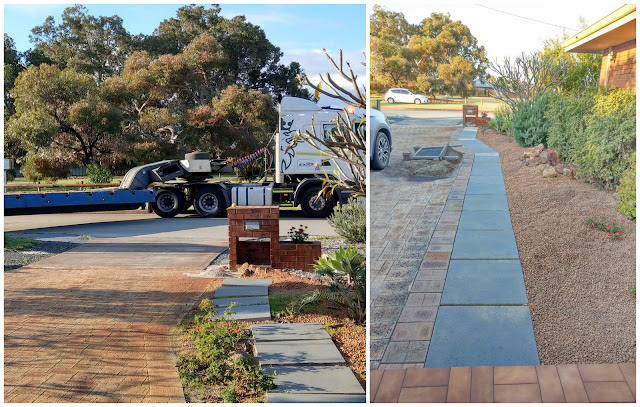 Met up with my ex-colleague Jan for a coffee and to pick more Fusion Mineral paint at The Upcycled Barn in Port Kennedy, about 50km south of where I live.
I've been busy getting through the furniture stash in my garage, and at the moment have a few projects on the go.

The heavy side table that I bought for $10 is being painted in Ash (dark grey) and the areas like the drawers and top were sanded down to bare wood and will probably get an Ash wash.
The free magazine stand was painted in Seaside with stenciled flowers on the sides.

The $20 small chest of drawers has been sanded, handles removed and is ready for the paint job.

The old roll-top desk that I bought ages ago at one of the Op-shops for $50 was badly damaged on the bottom and it wood a bit of internet digging to discover I could use Builder's bog, instead of wood filler to cover all the damaged areas.I started working on it in August and eventually finished it about two weeks ago.After covered up all the damage with the bog, came the sanding, cleaning and paint. Jose had wanted this desk for himself and I painted it in Midnight Blue and left the roll top in wood just giving it a lick of Hemp oil to revive the wood. It's probably a bit too dark, and I would have preferred to put some colour paper covering the back, but Jose doesn't like all those frills. 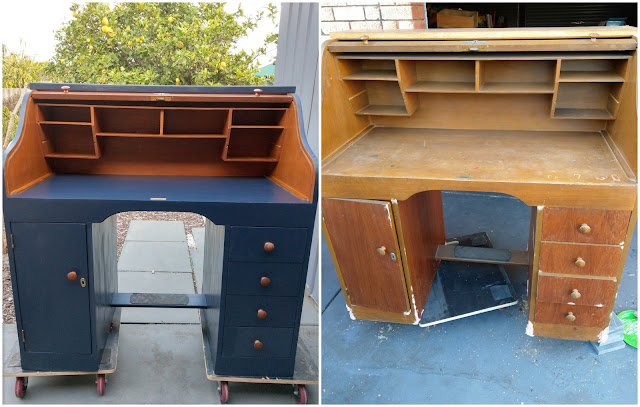 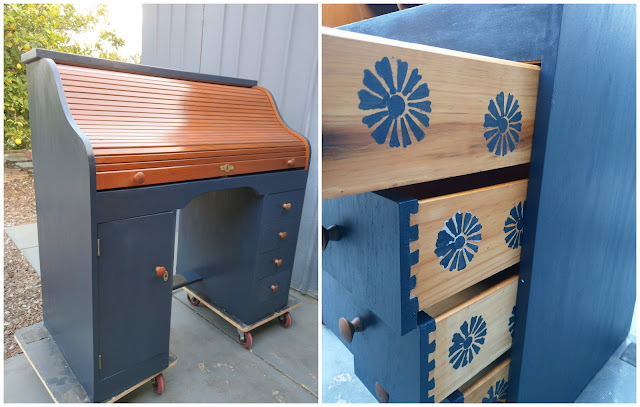 In mid August I Started a 6 week French course - I had enrolled in Level 2, but due to not enough enrollments the course was to be postponed to the end of September, or there were other options of classes in the city.
I called the college to see if they had parking available if I took the course in the city and was told yes. But then the lady convinced me to enroll in Level 3 in Manning, (where I was originally enrolled, just a 15 min drive from my house), which was starting the following week.
It's been a bit tough, a lot of Grammar, weekly homework too... I have no problem with the exercises and some of it feels quite intuitive if I think in Portuguese instead of thinking in English, but we do a lot of grammar and not enough conversation which was what I wanted to refresh my high school French.

The French lessons are held at the George Burnett Leisure Centre and when I arrived for one of the lessons I noticed they had a small "library" where you can drop and take books and I noticed a book called "Equador" an historical romance by the Miguel Sousa Tavares, a Portuguese writer, journalist and lawyer, the son of the much esteemed Portuguese writer and poet Sophia de Mello Breyner Andresen who died in 2004.

I flipped through the book expecting to find the book in English but it was in Portuguese. Anyway I brought the book home to read it as soon as I finish reading "Madly, Truly, Guilty" by Lianne Moriarty.


SEPTEMBER
The first of September was the start of Kings Park wildflower festival, but because it was a wet weekend we stayed home. On Sunday 8th, with a glorious 26C  day I convinced Jose to accompany me to Kings Park. 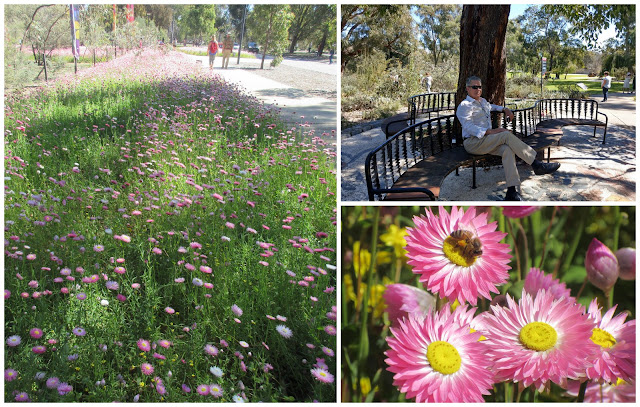 I went back to Kings Park on Friday 20th, at the invitation of my ex-colleagues Jan and Gill and we enjoyed a few hours walking around admiring the wildflowers and we even found a place in Kings Park that none of us had seen before - Naturescape, which I will show in a future post. 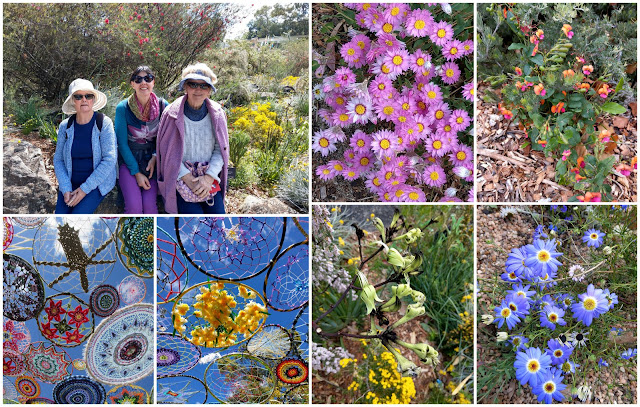 This Thursday 26th, I started Level 4 French for another 6 weeks and because the group dropped from 7 students to 4 we are having classes at the teacher's house, which is also in the suburb of Manning.
The teacher said she would try and include about 15 min conversation in each class, so hopefully I'll improve conversation.

The reason for the French lessons which every year I think I should do, is because my daughter's parents in law and brother in law are coming over from Marseille to spend Christmas with us.
They probably speak as much English as I speak French, but I thought it would be nice to be able to communicate a bit better with them instead of relying on Karina or Thomas to do the translation.

Having started at the end of July, I still have one cushion to finish sewing for the patio furniture - I used piping around the turquoise cushions as I thought it would look more professional, but being my first time doing this it has taken a lot of time, and I eventually decided I would only do it on one side! 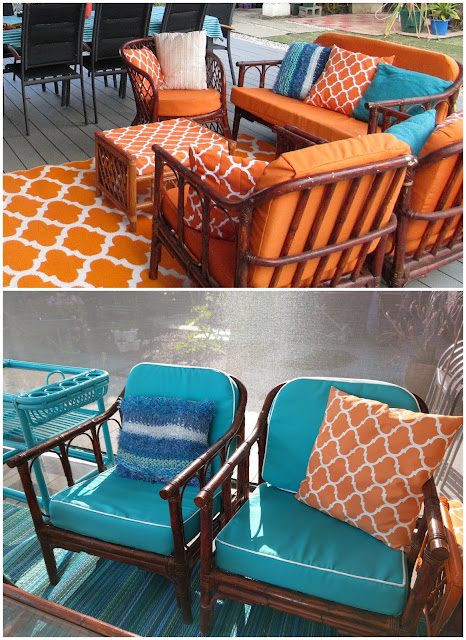 I have made 3 jars of lemon butter/curd with our lemons, made 3 jars of mulberry jam with mulberries collected from one of the "Buy Nothing group" participants, and finished the limoncello liqueur that had been marinating for about 1 month. 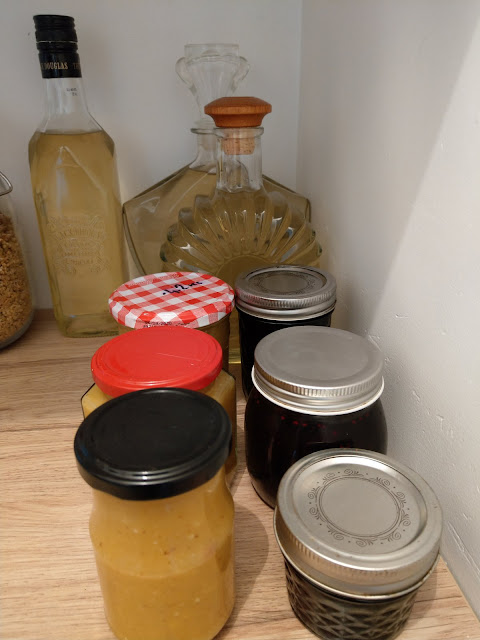 Jose planted a mulberry tree in our front garden, which was given to us by our green thumbed friend Tony. Not sure I will want all the mess they make ...
He also planted some veggies in our veggie boxes and we put up a net on the side as a sun screen so they don't get burned during this year's Summer.
And in our back garden the Spring flowers are blooming and the nasturtiums are taking over. 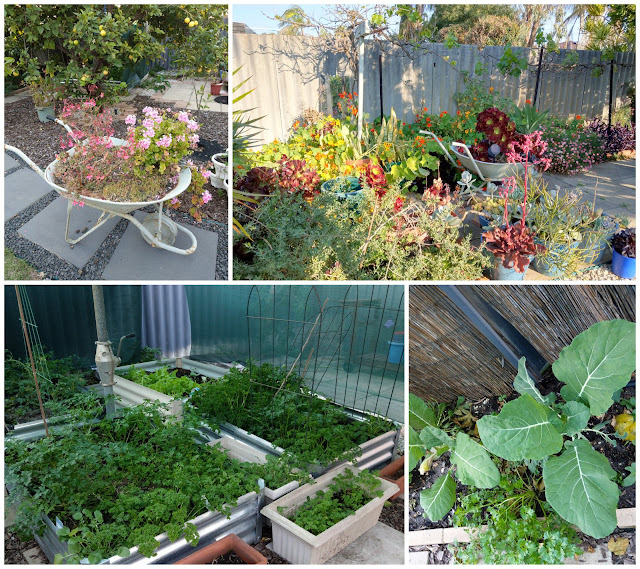 Next door construction has started.
The exterior walls are up, windows and doors have been set and walls are now up to ceiling height.
Jose and I walked around inside the other day and it's a massive with 6 bedrooms, 3 bathrooms, a study and open plan lounge/dining/kitchen and a double garage. 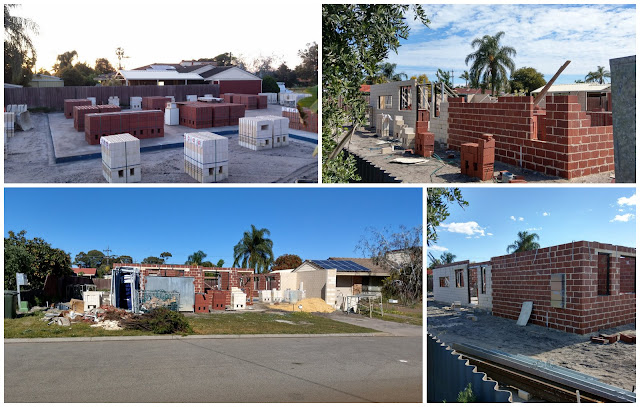 On Friday night, the 27th, we were invited to an outdoor picnic on the  South Perth foreshore right by the Swan river.
The other couple took pizza and we ordered "Nando's" grilled chicken. We got there close to 7pm and the temperature had dropped a bit (17C / 63F), so it was quite chilly to be out by the river, but we still had a great night.
After dinner we drove to their nearby apartment for coffee. 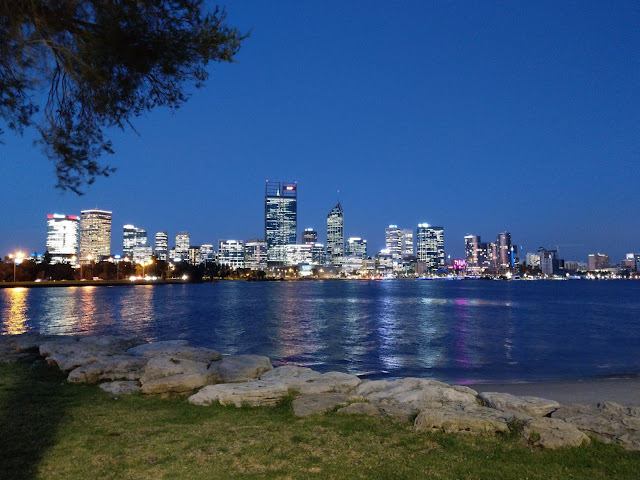 Monday is a public holiday - Queen's birthday, and along with a couple other people that work at the Clinic, we've been invited to go to Rottnest island on Sunday on the boat of one of the Doctors. I hope to have a chance to see some quokkas.
You'll have to wait for the next post 😉😉to see what they look like.
Wishing you all a wonderful weekend.