During the month of March there are quite a few birthdays and wedding anniversaries in my family, as well as a few friends celebrate in March too - all wonderful Pisceans.

My birthday was on Friday, 2nd March, but I didn't do anything special on the day as my husband was only arriving from Sydney that evening, to spend the birthday weekend with me.
On Saturday we had a group of friends over for afternoon snacks and drinks and it was a fun day.
I received quite a few lovely gifts and about 5 or 6 bunches of flowers that are now spread around the house. 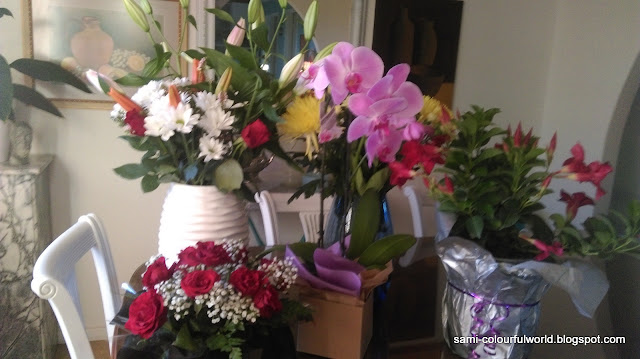 On Sunday, my husband just wanted to have a quiet day at home, so we watched movies and chatted about our forthcoming trip at the end of the month. I left Jose at the airport just after midnight as he was flying on the (Monday) 1a.m. flight, which he has informed me he won't do again as he's no longer 20 years old and can't go the night with hardly any sleep...

I know it's not a very pleasant flight but because they didn't have a public holiday on Monday like we did in Western Australia he wanted to fly back on Sunday so as not to miss work, as well as it was a much cheaper flight.

Luckily for me Monday was a public holiday in Western Australia - Labour day - so I could sleep late. Later I caught up on blogs, read, put paperwork in order and never even set foot outside as it was pretty hot (37C) and humid.


On Thursday 8th of March - International Women's Day - is my daughter's 33rd birthday.
Karina has become such a wonderful young woman - friendly, confident, respectful, hard-worker, ambitious (is this a quality?)...and I'm extremely proud of her achievements in her short life. She 's conquering the world a smile at a time!


She started travelling the world at 3 months of age, when we flew from Germany to South Africa. We lived in Germany until she was about 6 years old, so she also traveled a lot all over Europe when young.
Today she still loves to travel and is lucky that her job takes her to many places.
She has lived in a lot more places that I have - Germany, South Africa, Portugal, France, Holland and is soon moving to The Philippines.

It's so great that he has reached this wonderful age in relatively good health.
My Mom is planning a surprise birthday party (don't worry, he doesn't read the blog), with my sister who lives in Portugal and all his nephews and nieces are invited.
My Dad was the youngest of 5 brothers and sisters, he was 10 years younger that the next brother, and he's the only one alive.
Just like my Mom, he also attends Third Age University, started learning how to paint a decade ago, took up photography also a few years ago and always carries his camera with him just in case... He enjoys singing, he used to sing on the Radio before he met my Mom, and if asked he will still perform at parties - old fashioned romantic ballads are his specialty.

Happy birthday to all the March people!