Also joining Tom with Signs. Please check other signs from around the world here.

We returned from the Algarve to Cascais, for my last week in Portugal.

Early the next morning my niece Tania arrived from Angola with her 2 little girls and the following day my other niece Nadine, who lives in San Franciso, arrived from Geneva where they had been visiting her in-laws, with her husband and two kids.

My sisters and I had arranged a big lunch to which we had invited family and friends. Sadly, not all could make it, but a fabulous day was had by all that attended!

Everybody brought a sweet or a savoury dish, and we made a lasagne and a chicken curry.

A childhood friend of my younger sister (from South Africa, who living in the centre of Portugal) had travelled by train to be at the lunch. She had stayed overnight at my parent's place, and the next day before taking her to the train station, my parents, my sister Luisa and I took Lidia around Cascais for some sightseeing.

We first stopped at "Boca do Inferno" (Hell's Mouth) - the remains of an ancient cave in the Cascais coast, through which the waves crash, specially violently during Winter.

Then we visited "Casa da Guia" (Guia's House, Guia being the area in Cascais), a beautiful, renovated building that houses outdoor cafes, some upmarket shops, art gallery...and visiting the house, we walked the coastal path for the sea views.

Two days later my young sister Luisa flew back to South Africa, but not before we went to Lisbon for a quick and fun tuk-tuk tour. We parked the 2 cars in an underground carpark below Rossio Square, where we started our tour.

Rossio Station - was formerly known as Central Station, (word still inscribed in one of the entrance arches), it looks very much like a palace with its horseshoe doorways, built by Franco-Swiss Blaise Cendrars, which called train stations "the most beautiful churches in the world".
It's now home to the Sintra train line.
Located in Rossio Square, the liveliest square in Lisbon, which is surrounded by cafes and restaurants with outdoor sitting.  The square is paved in black and white cobblestones in a wave pattern.
On either side of the square there is a fountain and in the centre a 27mt high column with a statue of Dom Pedro IV on top.
On the north side is the neoclassical 1840's Dona Maria II National Theatre, with 6 Ionic columns that were originally in St Francis church which was destroyed in the 1755 earthquake.

Known as the city of the 7 hills, Lisbon has about 30 "Miradouros" (viewpoints) scattered around the city. One of our tuk-tuk stops was at popular Miradouro Santa Luzia, next to the small church of the same name, which are the headquarters of the Order of Malta in Portugal, in the parish of Alfama.

The view over the rooftops below, extends to the port where we could see a huge cruise ship, and to the left we can see St Stephen's Church, which was originally built in the 12th century, originally with two towers, but one was damaged in the 1755 earthquake. The church was later renovated and reopened in 1773.

To the right you can see the dome of the National Pantheon, originally the Church of Saint Engratia when it was built in 1682, becoming the Pantheon in 1916.

The dome was only completed in 1966, making it the monument that took the longest to be complete in Portugal!  In Portugal when something takes ages to be completed, we say: "it's like the St Engratia build".

The Pantheon was built over the site of a previous church that was desecrated by a robbery in 1630, when a Jew was blamed and executed and later exonerated.

Before he died, he said that a new church would never be completed...

As if he had predicted it, just months after the start of construction in 1681, it collapsed due to a storm on a poorly built foundation.

It now holds the tombs and cenotaphs of famous Portuguese who distinguished themselves in politics, culture, science, sports - who made a mark in the history of Portugal and took the image of the country beyond borders - people like the great fado singer Amália Rodrigues, the footballer Eusébio, presidents, explorers like Prince Henry the Navigator, poets...

Next stop was the "Miradouro Senhora do Monte"  (viewpoint Lady of the Hill) where we can see most of the city below, including the 25th April Bridge and the Christ the King statue across the Tagus River and the Saint George Castle atop a hill.

We stopped at the Elevador do Carmo (Carmo Lift or Santa Justa lift), in the parish of Santa Justa. The lift connects the lower streets of Baixa (downtown) with the higher streets of the parish of Bairro Alto (the lowest and highest points of Lisbon).
This beautiful structure was built in 1902 by French architect Raoul de Mesnier du Ponsard, an apprentice of Gustave Eiffel, which explains the structure's similarity with the Eiffel Tower.
The top of the 45mt high structure reached via a spiral staircase also has a great view over the city, including Rossio Square, the castle and the river. 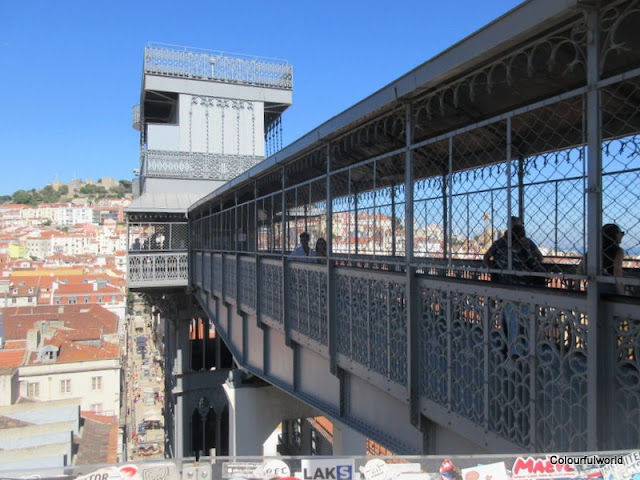 At the back of the Carmo lift is the Convent of our Lady of Carmo, now home to the Carmo Archaeology Museum. Next to it stands the gothic Carmo Church, at the time the largest church in Lisbon.
With its bare arches and no roof, the church is a poignant reminder of the devastation suffered during the 8.9 earthquake on 1st November 1755, which killed hundreds of church goers that were gathered for the All-Saints celebration, and the fires from the toppled candles that raged on for days.
I've actually never been inside, or visited the museum, but it's one place I would like to return to on my next visit to Lisbon. 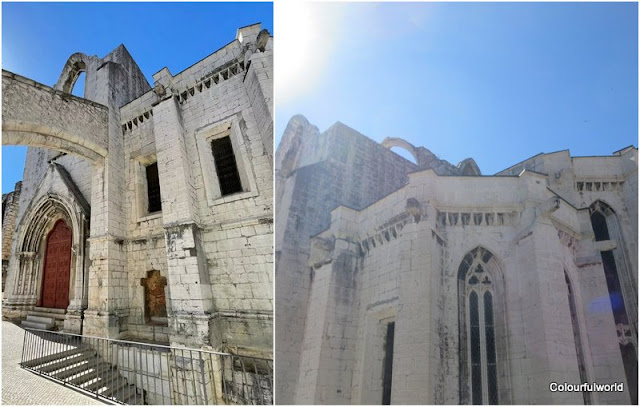 Our last stop was Praça do Comércio (Commerce Plaza), one of the largest squares in Portugal with 30,600m2 (320,000 ft2). It's just across from the Tagus River and is also known as  Terreiro do Paço (Palace Yard), as it was before its total destruction in the 1755 earthquake the site of the Royal Palace of Ribeira.
Since the 19th century, the U-shaped buildings around the square house the most important Portuguese state departments - Ministry of Finance, Internal Administration, Agriculture and Maritime Affairs, Supreme Court...and also the Museum of Lisbon.
The arch - "Arco da Rua Augusta" (Arch of Augusta street, on the other side of the arch), has a clock and statues of Glory, Ingenuity and Valor, plus those of Viriathus (leader of the Lusitanian people in the 3rd century), Nuno Álvares Pereira (14th century general who secured independence from Castile) Vasco da Gama (famous explorer) and of course, the Marquis of Pombal (prime minister of King Jose I, who co-ordinated the building effort after the earthquake).
In was in this square that in February 1908, the King Carlos I (Charles I), the penultimate king of Portugal was assassinated on the way back to the palace when the carriage containing the King and his family crossed the square. Two years later the monarchy was overthrown by members of the Republican party.
You can climb up to the arch where you also have a view of the river and surrounding area.

Our fun 2 1/2 hour tuk-tuk tour finished, and we met up with my niece Tania and her baby at the Hard Rock Cafe, then back into the cars to Cascais, prepare and have dinner, then we took my sister Luisa to the airport that night. 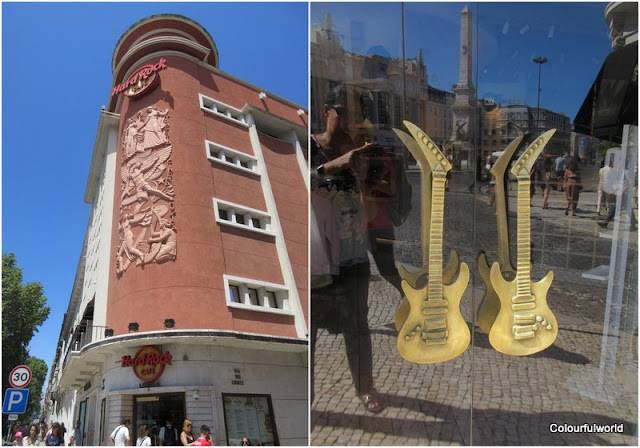 The following day I got a ride with one of nieces into Lisbon so I could go and pick up our Portuguese passports and ID's which we had done in the Algarve and they had been sent to the main office for collection.
The offices were near the Vasco da Gama shopping centre, one of Lisbon's most modern shopping malls, located in Parque das  Nações (Park of Nations), also known as Expo, in the area built during the World Expo 1998.

The Expo area is the most modern part of the city, with a train/bus station across from the shopping centre, "Gare do Oriente" (Oriente Station) which was designed by famous Spanish architect Santiago Calatrava and inaugurated in May 1998 as part of the '98 Expo World Fair.
I returned to Cascais by train, from the Gare do Oriente. 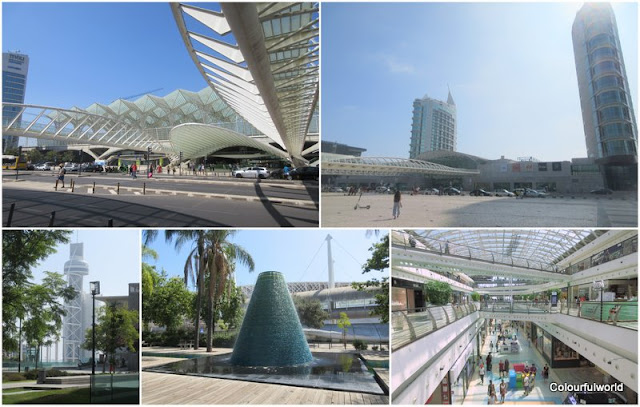 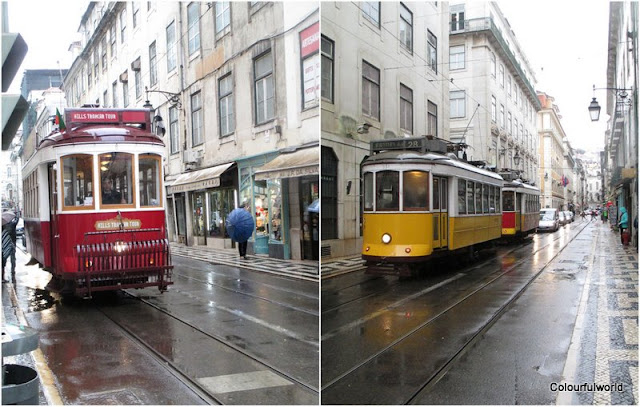 After 4 weeks with the family, it was with sadness that we said our goodbyes ...
One of my nieces and my Mom drove Karina and I to the airport for our lunch time flight. We flew together to Frankfurt, where Karina caught a train home to Cologne, and I caught the flight to Singapore and then Perth.

Before embarking I still bought a box of 6 Portuguese tarts to bring for Jose - but of course, nothing like the real thing you get in Patisseries or in the original factory/cafe in Belem!!